Sitecore Experience 2020 – What were the 3 key takeaways for marketers?

Last Wednesday (4th March) marked the annual Sitecore Experience Event, a 1-day event bringing together marketers and tech professionals from a myriad of digital agencies to share digital transformation trends and endeavours. Crammed with insightful keynote speeches and ground-breaking examples of how Sitecore is being used to improve customer experiences and simplify people’s lives, the event’s overarching theme was “Powering Marketing through Human Connections”.

Designed for marketing executives, digital strategists and digital technologists, the event delivered some key takeaways on how we can drive better engagement, improve customer satisfaction and increase revenue.

Be human – After Sitecore’s CEO Mark Frost opened the event, he was closely followed by Chief Marketing Officer, Paige O’Neill. Paige estimated that by 2022, companies across the globe would be spending 2 trillion pounds on digital experiences for their customers and that currently 74% of consumers will prioritise experiences over products.

Experiences are quickly becoming a new economy, but a lot of businesses aren’t creating the level of  relatable, human experiences for their customers. Creating human connections can power a great customer experience, and when only 62% of consumers feel like they have a relationship with brands, it’s important to create emotional connections with consumers.

Paige used John Lewis’s latest Christmas ad to give context to her suggestions, explaining how Edgar the Dragon and his inability to not embarrassingly singe the village’s Christmas tree, or melt the ice rink doubled John Lewis’s customer numbers over the Christmas period. This supported Paige’s next stat, when she stated that 31% of us spend more on brands that we feel connect with us emotionally.

Paige also stated that by 2022, our phones, tablets, voice assistants and laptops will know our emotional state better than our own family. So it’s time to start creating experiences and delivering communications that connect with your customers on a human, emotional level.

Be authentic – Cristina de Balanzo is the Founder of Walnut Unlimited, a London-based research agency with an aim to understand human behaviour at its deepest, and most emotional level. Socially, economically and neurologically.

Cristina’s keynote explored neuroscience and how the brain is programmed to notice movement in advertising and simplicity in design. Cristina’s understanding of the brain and how it works, had a sea of phones in the air, snapping pictures of her slides as she explained how technology has allowed human beings to measure any piece of advertising and decode it emotionally. 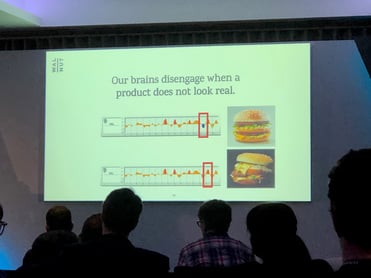 To exemplify this, she showcased various pieces of food-based advertising, adverts from the likes of Burger King and McDonalds.

Elaborating on the burger ad, Cristina’s slide featured a burger that looked like what you would imagine the “perfect” burger to look like, the other picture featured a more authentic version of what a burger looks like, with melting cheese down one side and slithers of lettuce poking out of the bread bun.

Cristina used the example of the two burgers to show how the “perfect” world of advertising is not quite up there with what consumers are actually looking for, and that our brains are able to detect that something or someone is not genuine. In fact, the statistics Cristina went on to reveal showed that consumers engaged far better with the burger ad that they deemed to be genuine, realistic and authentic.

Be a storyteller – Ending the day with an impact, Microsoft’s Chief Storyteller, Steve Clayton unpacked his journey to earning such a title (a title that I must admit, I am slightly jealous of). Reflecting on his journey from Liverpool to the role of Chief Storyteller in Microsoft’s HQ in Seattle, Steve provided fascinating insights into his mission to change the perception of Microsoft through telling stories.

Steve’s keynote really highlighted how “it takes courage to be ruthlessly authentic” and what a “good story” actually is. Though this may seem obvious, the keynote highlighted just how many marketers miss the mark when relaying important pieces of information like case studies, and emphasised how telling customer stories are richer, more compelling for those who read/watch/listen to them.

Steve elaborated on his process, particularly around case studies, and his finding that people engage better with the discussion of other people, far more than they do with discussions of what technology was used to achieve certain aspects of the project.

Steve did a very similar keynote for TEDxLiverpool in September 2016. I’d thoroughly recommend watching it:

A noteworthy, and very profound element of this year’s event was Sitecore’s support of Macmillan Cancer Support. During her keynote, Paige O’Neill highlighted a wall in the venues networking area that was covered in white paper planes. Everyone in the auditorium had a green paper aeroplane under there seat, with space on the inside to write a pledge. 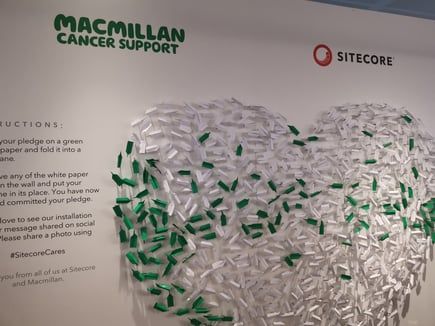 Paige encouraged every attendee to swap the white planes for the green planes containing their pledges. When swapping out the white planes, every one of them had a message from someone who had benefited from Macmillan’s care services. By the end of the day, the wall was a sea of green and for every pledge attached to the wall, Sitecore donated £5 to Macmillan Cancer Support. A touching show of support for an amazing charity!

Thanks to the Sitecore team for another amazing event – we had a great day!